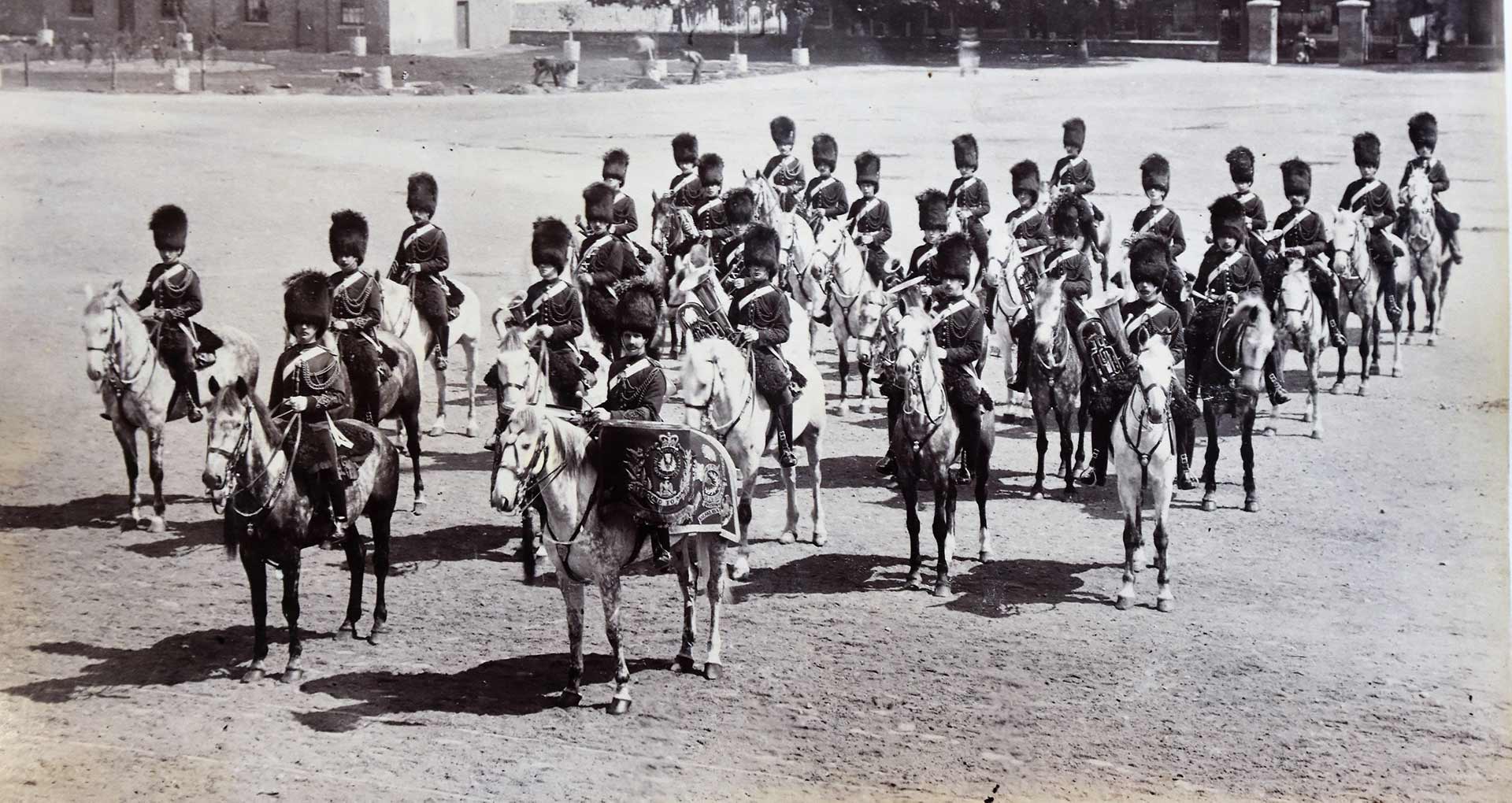 The music of the Royal Scots Dragoon Guards represents a unique military tradition dating back over 300 years. Drawing influences from across Britain and other countries, bands have played a central role in regimental life and their music has been enjoyed by millions around the world.

Military bands of the regimental family

The origins of the regimental or military band can be found in the ‘hautbois’, an early form of the oboe and the name given to its players. Hautbois were attached to companies of Scots Dragoons from the late 17th century. The Dragoons were also accompanied by mounted drummers playing infantry-type side drums carried on their saddles. Trumpeters appeared in troops of the 4th Horse during this period and the regiment later introduced kettledrummers.

The official concept of the military band evolved in the British Army during the 18th century. By the mid-19th century, the 3rd and 6th Dragoon Guards and the 2nd Dragoons (Royal Scots Greys) all had their own bands. Before the mechanisation of the cavalry regiments, the bands were mounted on horses. The Royal Scots Greys military band was particularly distinctive sporting black bearskin caps with red plumes. The kettledrummer wore a white bearskin cap in the late 19th century, a tradition that was revived in the mid-1930s.  After the 3rd Carabiniers and the Royal Scots Greys converted to using tanks, their bands dismounted but the tradition of the kettledrummer riding on horseback continued on special occasions.

The Pipes and Drums of the Royal Scots Greys

After the Second World War the Pipes and Drums performed regularly at public engagements at home and abroad. In 1955 the Pipes and Drums made their first appearance on television performing at the White City Stadium in London. They made their debut at the Edinburgh Military Tattoo the same year. Along with the Royal Scots Greys’ military band, the Pipes and Drums played an important role in fostering friendly relations between West Germans and the British Army of the Rhine during the Cold War. In September 1962 they accompanied the military band on a tour of the United States and Canada with the Argyll and Sutherland Highlanders’ bands, visiting sixty-five cities in seventy-eight days.

The music of The Royal Scots Dragoon Guards

After the Royal Scots Greys were amalgamated with the 3rd Carabiniers to form the Royal Scots Dragoon Guards (Carabiniers and Greys) in 1971, their bands merged. Just before the amalgamation ceremony on 2 July 1971, Her Majesty the Queen presented the new regiment with its first drum horse, Trojan, at the Palace of Holyroodhouse.

The newly formed Regimental Band and Pipes and Drums recorded the album Farewell to the Greys at Redford Barracks in Edinburgh as a collaboration. The album included a version of Amazing Grace with a pipe score written by the man who was to become the new regiment’s Pipe Major, Tony Crease. Following its release as a single, the tune went to number one in the pop charts in April 1972. The single went on to sell over ten million copies and led to performances on Top of the Pops. Regimental bands playing together with pipes was ground-breaking and set a new trend in military music.

The pipers and drummers have always been fully trained crewmen for armoured vehicles.  The military bandsmen had a secondary role as medical assistants and in 1991 they trained to drive and maintain armoured ambulances in just a few weeks to follow their colleagues into action during the Gulf War.

With the end of the Cold War, the government scaled down the British Army, reducing the number of military bands by more than half. The defence cuts spelled the end for the Royal Scots Dragoon Guards Regimental Band which played its final concert at the Usher Hall in Edinburgh on 27 May 1994. In its absence the Pipes and Drums continued to play and expanded their instrumentation to compensate for the lack of a full band. In 2002 they released the album Parallel Tracks, featuring a version of Going Home, the theme from the 1983 film Local Hero, with a guest performance by Mark Knopfler on guitar. Spirit of the Glen was released in 2007 and went to number one in the classical charts. The follow-up Spirit of the Glen: Journey won the Classical BRIT Awards Album of the Year in 2009. Recording of the latter album began in Edinburgh but had to be finished in a tent in the heat of Basra, after the regiment was posted to Iraq on active service.