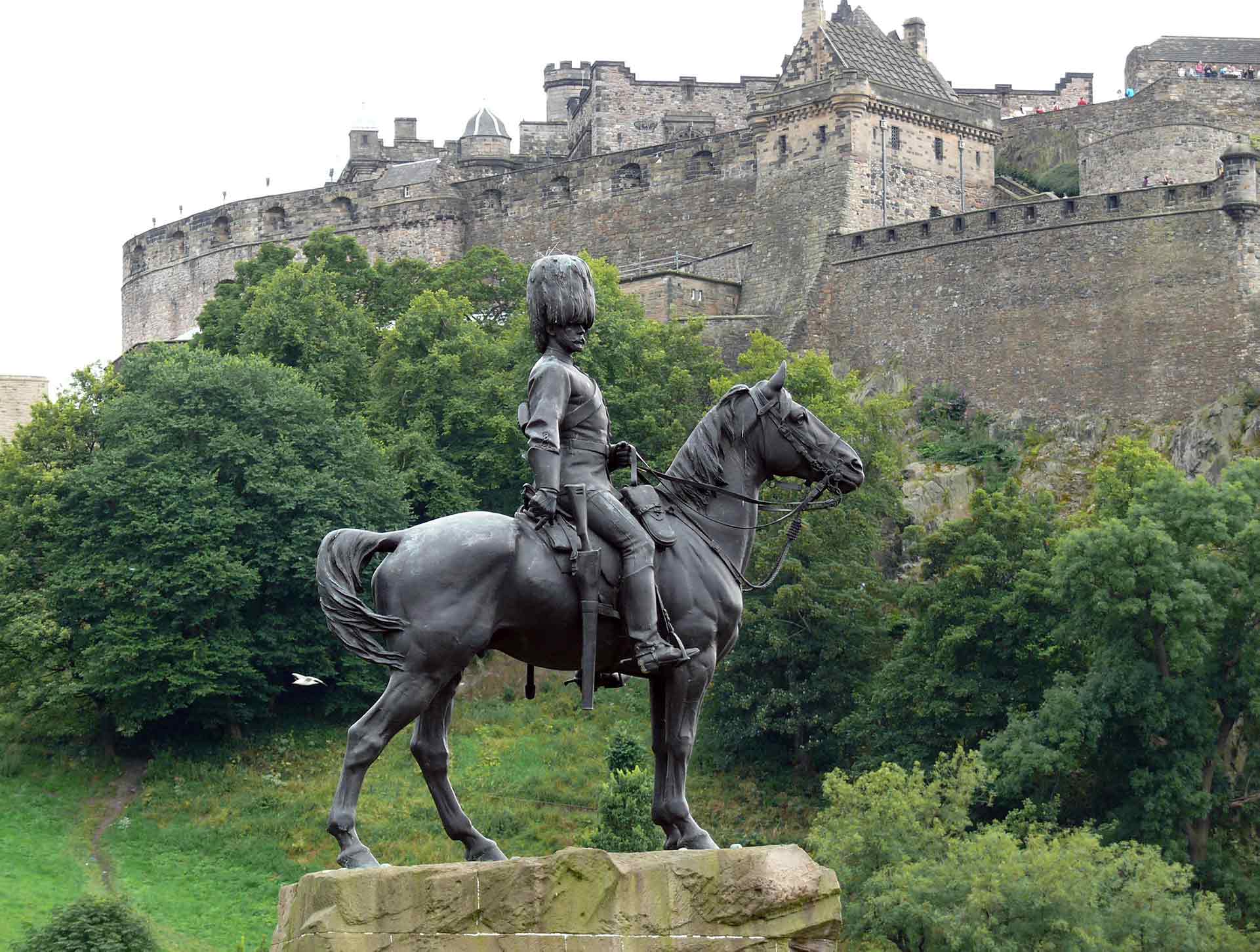 The fallen of the Royal Scots Dragoon Guards’ antecedent regiments are commemorated by public memorials in the capitals of Scotland and England. Numerous smaller memorials to the regiments and individual servicemen are located in local churches. A memorial to the Royal Scots Dragoon Guards and their regimental forebears was also unveiled at the National Memorial Arboretum in 2019.

A well-known capital landmark, the memorial to the Royal Scots Greys stands on a rock pedestal high above Princes Street Gardens in Edinburgh. The bronze statue of a trooper was designed by the Scottish sculptor William Birnie Rhind. The memorial was unveiled by Lord Rosebery in 1906 to commemorate the regiment’s dead from the Boer War. Later plaques on the pedestal remember Scots Greys who fell in the two world wars and the Korean War, and Royal Scots Dragoon Guards killed on active service in Northern Ireland and Iraq. 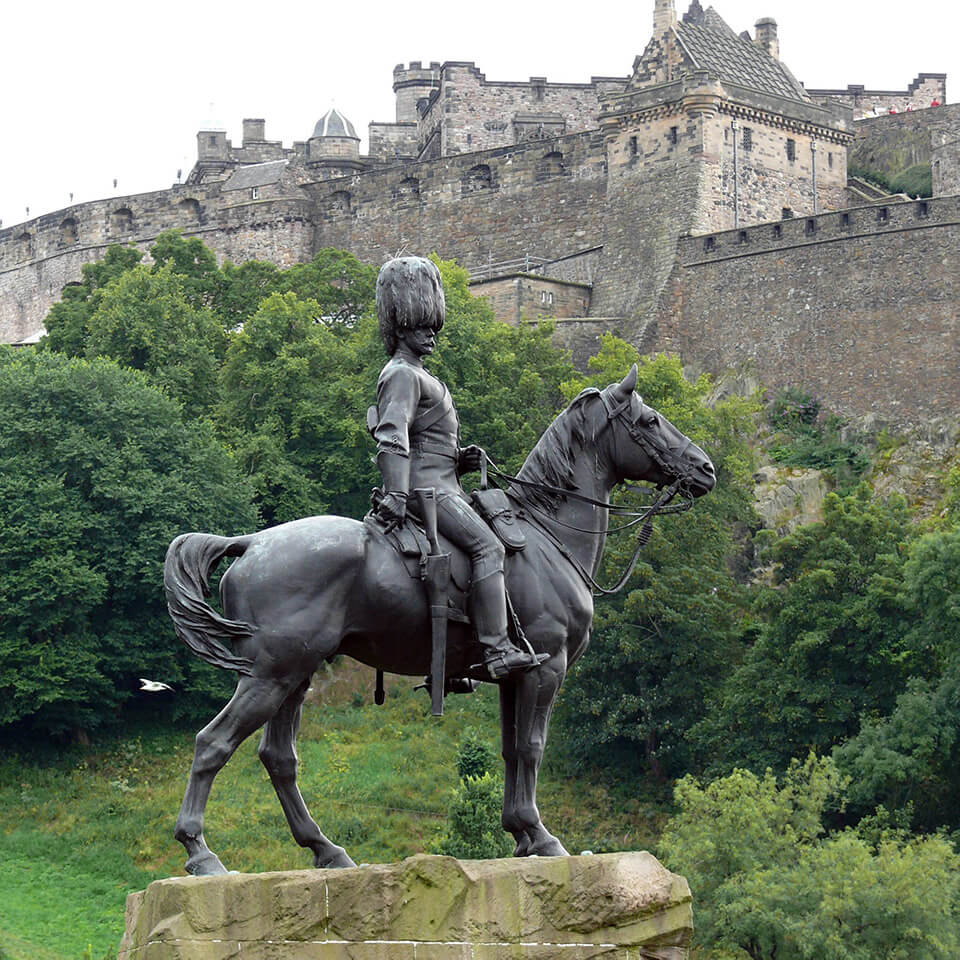 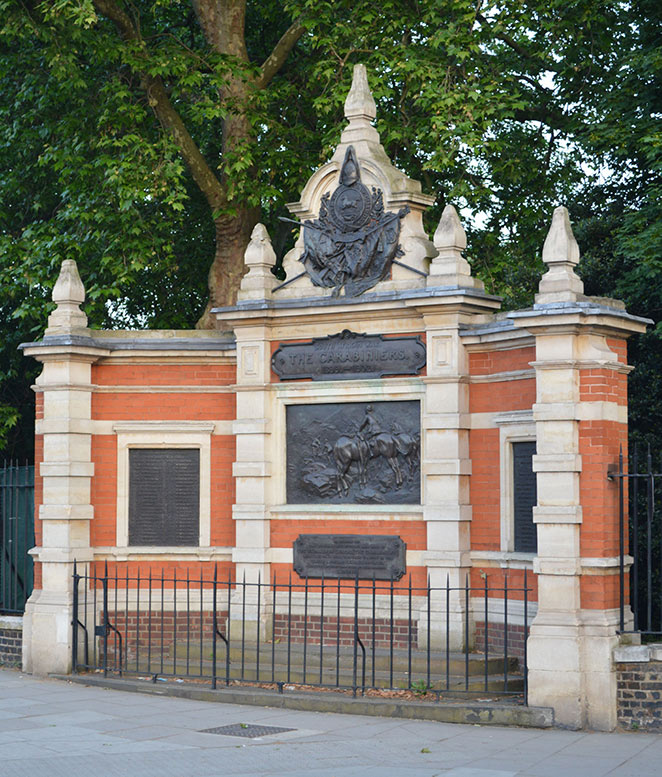 The 6th Dragoon Guards (The Carabiniers) who died in the Boer War are commemorated by a memorial on Chelsea Embankment in London. The stone and brick structure features a central bas-relief in bronze and was designed by Captain Adrian Jones.

A memorial to the Carabiniers killed in the First World War can also be seen in Canterbury Cathedral. The sculpture was executed in bronze and marble by Esmond Burton to the design of Thomas Arthur Darcy Braddell. It was unveiled in 1925 by Field Marshal Viscount Allenby who had commanded the Carabiniers and the Royal Scots Greys during the Boer War.

A memorial to the 3rd Carabiniers (Prince of Wales’s Dragoon Guards) stands in St Michael’s Garrison Church at Tidworth. The carved wooden memorial was originally erected in the garrison church at Sialkot, India, where the regiment was stationed before the Second World War. It also commemorates the 3rd and 6th Dragoons Guards who amalgamated in 1922 and were titled the 3rd Carabiniers in 1928. The memorial was removed from Sialkot in 1947 at the time of Indian independence. 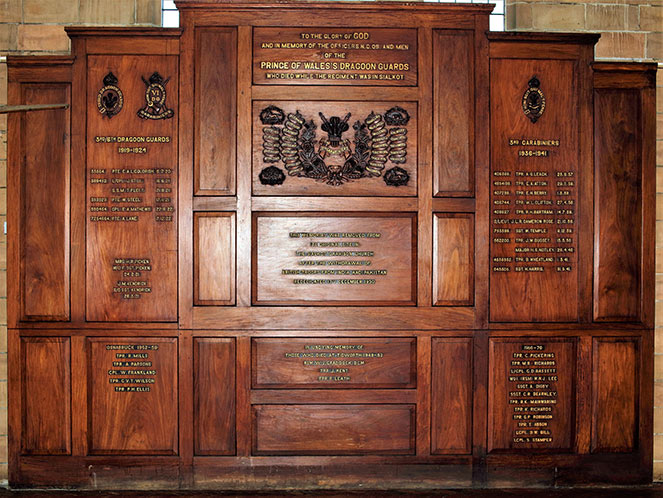 You can find more information about local memorials by searching the War Memorials Register.