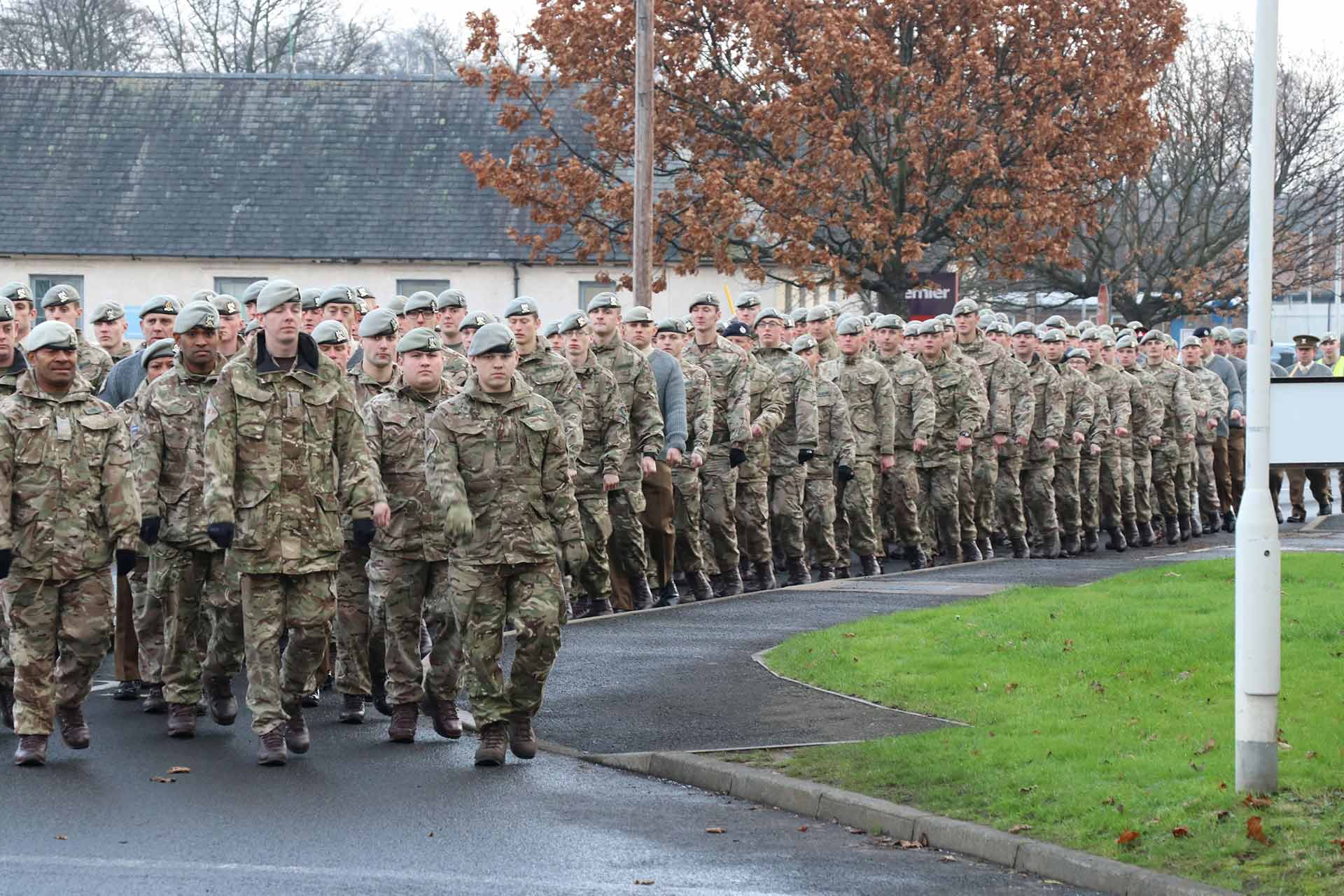 Waterloo Lines is our home in the heart of Scotland.

Waterloo Lines, Leuchars Station is the home to the Regiment in Fife, Scotland. Located 500m from the local train station just 5 miles from St Andrews, and 8 miles south of Dundee it is a fantastic location for the Regiment and its wider family.

In camp we have accommodation for all our family whether that be the barrack blocks, various messes our houses for the families. 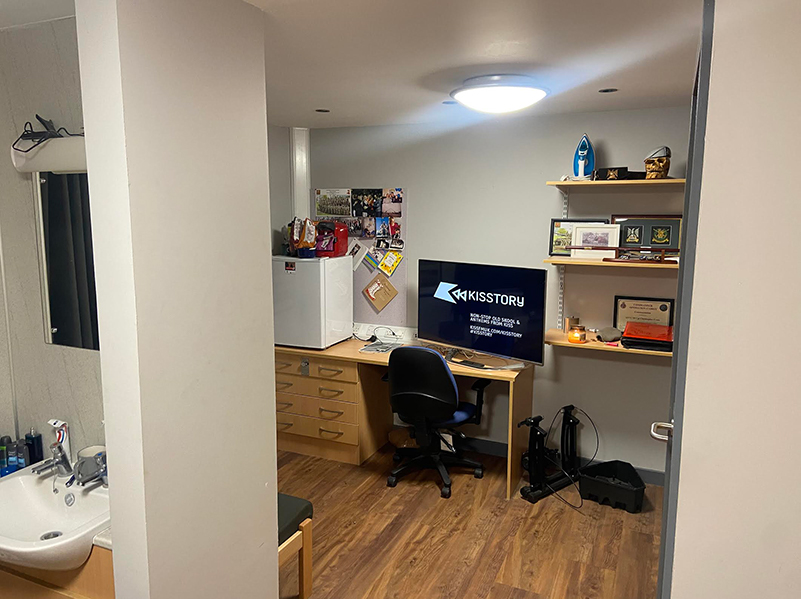 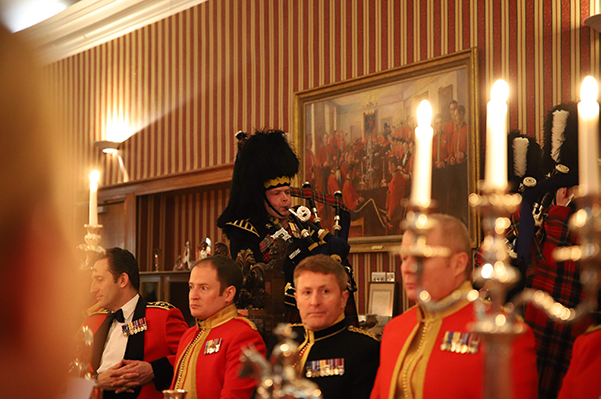 (''No one provokes me with impunity'')
The motto of the Order of the Thistle, borne at the centre of the standard.

(''I serve'')
The motto of the badge of the Prince of Wales, inherited through the 3rd Dragoon Guards.

The famous second motto of the Royal Scots Greys (2nd Dragoons). This motto has special significance for the Royal Scots Dragoon Guards since they take second place amongst the regiments of the Cavalry of the Line, yet are the oldest of them all. This comes about because, when raised, the regiments of Horse which later became Dragoon Guards were allowed to take precedence over the two already existing regiments of Dragoons, the Royals (now incorporated into the Household Cavalry) and the Scots Greys.

Each year the Regiment celebrates its three principal battle honours on, or as near as possible to, the day:

Recalling the 3rd Carabiniers action in Burma in 1944. Every year the Regiment Parades with B Sqn marching on separately as they were the Sqn involved. The officers of B Sqn do not march as they were all killed inaction.

When Sgt Charles Ewart of the Royal Scots Greys captured the Eagle of the 45th Regiment at the battle of Waterloo.

To celebrate the successful charge of the Heavy Brigade. The Warrant Officers are invited for dinner in the Officers' Mess to commemorate the award of Victoria Crosses to Sgt Major Grieves for saving the life of an officer and to Private (late Sgt) Ramage for rescuing comrades from the aftermaths of both the Heavy and Light Brigade charges.

The Loyal Toast is drunk at formal dinners in the Mess and is always drunk seated, except when Royalty is present. On evenings when a military band is present, besides playing "The Queen" the band also play "God Bless the Prince of Wales", an old 3rd Dragoon Guards custom, and the "Imperial Russian Anthem" in memory of Tsar Nicholas II, the Colonel-in-Chief of the Scots Greys, killed with his family during the Russian Civil War (1918).

Although no longer a general issue, full dress uniform is still maintained by the Regiment for special occasions. The tunic is the traditional scarlet of British Heavy Cavalry but, although a 'Royal' regiment, the facings on the collar and cuffs are not blue, but yellow - a colour inherited from the 3rd Dragoon Guards. The leg wear - 'overall' or 'pantaloons' - is dark blue with double stripes of yellow. The double stripes originate from 1851 when the Carabiniers adopted certain items of Light Cavalry dress, whilst yellow was the colour of stripe worn by both the 3rd Dragoon Guards and the Scots Greys.

With full dress the Regiment has inherited from the Scots Greys the privilege, unique amongst British Cavalry, of wearing the bearskin cap. The traditional headdress of grenadiers, it is said to have been awarded to the Greys for their defeat of the Regiment du Roi at Ramillies in 1706. The original grenadier caps had tall stiff embroidered fronts reminiscent of a bishop's mitre, but in 1768 an order decreed that henceforth grenadier caps throughout the Army were to have their fronts covered with bearskin. The new pattern was not actually adopted by the Greys for a further ten years, but it is from this that the present cap has evolved.

The forage or No.1 Dress caps of the Regiment are dark blue with a yellow welt and a unique zigzag vandyk band. This pattern is believed to have originated from that on the Kilmarnock bonnets worn by the Scots Greys in undress uniform at the close of the 18th Century. These bonnets were blue with a red band bearing a white vandyk - gold/yellow for officers and sergeants By the second half of the 19thCentury these caps had evolved into the Victorian pillbox, but the vandyk remained, as it did when early in the 20th Century the pillbox gave way to a peaked cap. At this stage, however, all ranks adopted the white vandyk except the bandsmen, who wore yellow. When the Royal Scots Dragoon Guards formed, the entire regiment adopted a yellow vandyk, a plain yellow band having been worn by both the 3rd Dragoon Guards and the 3rd Carabiniers. The yellow vandyk is also worn on the feather bonnets of the pipers.

The Badge of the Order of the Thistle

The original badge of the Scots Greys, its display is now confined to the Standard, Drums and Drum Banners.

The Regimental Badge and Cap Badge

A French Imperial Eagle in silver upon a plaque "Waterloo", surmounting Crossed Carbines in gilt. Beneath is a scroll, "Royal Scots Dragoon Guards". The eagle commemorates that captured by the Scots Greys at Waterloo and subsequently worn by them as a badge on sabretaches (a pouch attached to the sword slings when mounted), pouches and, eventually, as a cap badge.

The crossed carbines have decorated the buttons and shabraques of the Carabiniers since the 1770s and later formed their cap badge. The Regiment's Collar Badges are similar and larger

versions, without the scroll, are worn on pouches and by Senior NCOs on their arms.

The Plume of the Prince of Wales

With its motto "Ich Dien'; worn by all members of the Regiment embroidered on the upper part of the left sleeve. The right to wear this badge was granted to the 3rd Dragoon Guards in 1765, subsequently became their cap badge and later, with the crossed carbines, formed the badge of the 3rd Carabiniers.

Based on the Order of the Thistle superimposed on Crossed Carbines, it is engraved on regimental stationery, on Officers' Mess silver and is displayed on pipe banners and sometime on vehicle panels. Its use in this manner originated in the Scots Greys, the Order of the Thistle having been regarded as their badge from the 17th Century until the Napoleonic Eagle became their cap badge at the start of the 20th Century.

The White Horse of Hanover

The badge of the Kings of Hanover, is worn on the backs of the soldiers' bearskins and on the plaid brooches of the pipers.

Bearing the Royal Arms, St Andrew with his cross and "Waterloo" forms the plume socket on bearskins and a plain grenade is worn by officers on the collars of their full dress tunics and as a throat clasp on their cloaks. It is also worn as a cap badge by trumpeters. It is an emblem long associated with the Scots Greys and their Horse Grenadier uniforms.

Have the Eagle and Carbines badge with the exception of those on officers' caps, which have thistles.

Other distinctions in dress and accoutrements

The Mess Kit is scarlet with yellow facings and a yellow waistcoat embroidered with gold thistles. Officers' cloaks are dark blue with a scarlet lining and grenade clasp. In Full Dress Dismounted Order and in Mess Kit the field officers wear straight silver spurs with rowels ornamented with thistles; like their gold sword knots which are also fashioned like the head of a thistle. The spurs of the Colonel and the Commanding Officer are gold.

The officers have leather buttons, originating from those worn by the Scots Greys in the Boer War, a brown leather pouch and wear their swords slung. A similar pouch belt is worn by the soldiers.

The gold lace worn on uniforms and NCOs' chevrons is thistle patterned, whilst officers' gold belts are woven with thistles and saltires. The Colonel and the Commanding Officer wear double gold laced stripes on their overalls.

The black backings to badges and black welts on officers' khaki caps originate from the Scots Greys. They and the Royals (1st Dragoons), both being Royal regiments wore dark blue Royal facings on collars, cuffs, behind their badges and, in the case of the Scots Greys, on the welts of the officers' khaki caps - their dress caps having been royal blue with a white welt. In both regiments that dark blue evolved into black. The black backings were retained by the new Regiment to set off their silver badges against the yellow facings, adopted from the 3rd Dragoon Guards.

Officers' chargers have red and black horsehair jowl plumes hanging from their bridles, thistle stirrup runners and the Order of the Thistle on bits and breastplates. The black lambskin saddle covers have scarlet scalloped edging.

On informal occasions in their own Mess, officers may, at the discretion of the Commanding Officer, wear trews of Black Stewart tartan with their blue Undress tunics and also when in a civilian dinner jacket.

The colours are adjacent narrow stripes of grey, yellow, and red upon a dark blue ground. On the tie the stripes run diagonally downwards from the wearers left shoulder. These colours are also on the ribbon to the Duke of Kent's Medal.

The Royal Scots Dragoon Guards have retained the Scots Greys' tradition that the entire regiment be mounted on grey horses. Throughout the centuries this tradition was maintained and the splendid sight of rank upon rank of grey horses with their scarlet and bearskin clad riders, has left a lasting impression on the minds of artists and the general public. The Regiment is, of course, now part of the Royal Armoured Corps and horses are no part of its official equipment. Nevertheless, the Regiment strives to maintain its cavalry traditions and small detachments in full dress uniform and mounted on greys are provided for ceremonial occasions whenever it is practicable. Equestrian sports, including polo, are much encouraged.