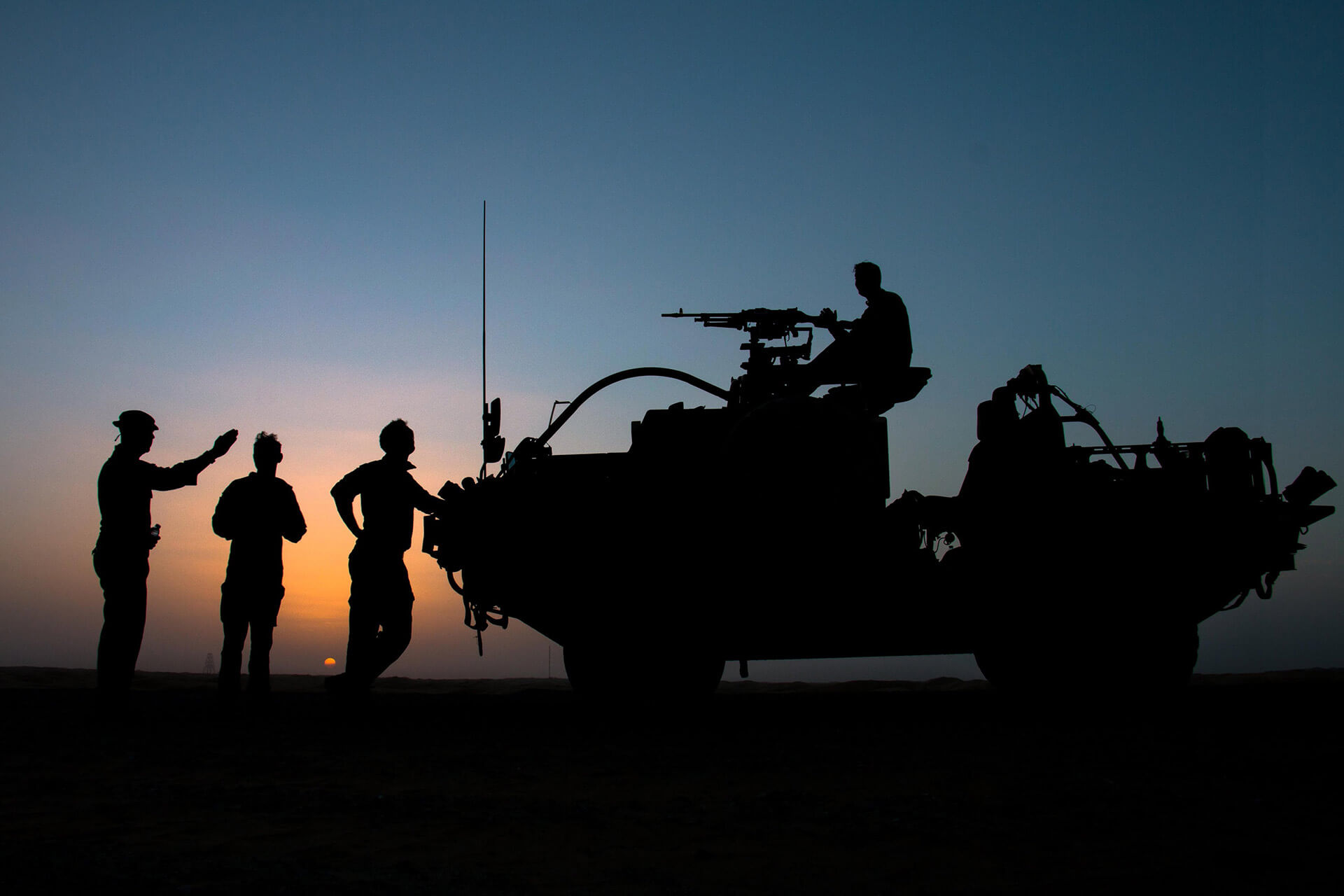 It makes us active and agile, capable of both deterring threats and defeating the enemy.

It is designed to protect personnel against roadside explosions and mine attacks (the chassis is heavier than its predecessor to give additional protection). Jackal 2 is armed with a General Purpose Machine Gun for crew protection and can carry either a Heavy Machine Gun or a Grenade Machine Gun as the main weapons system in the fire support role. 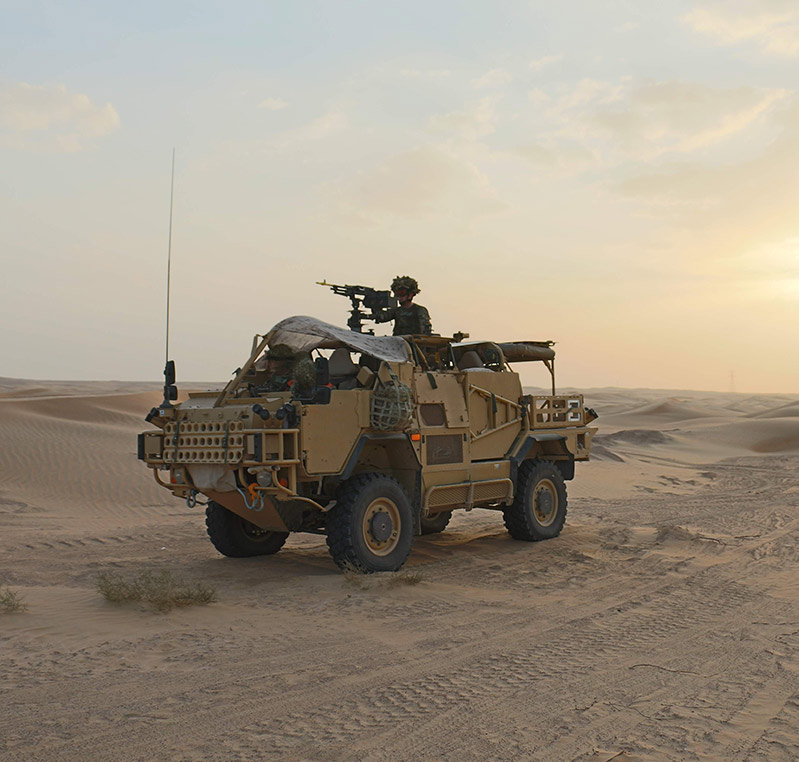 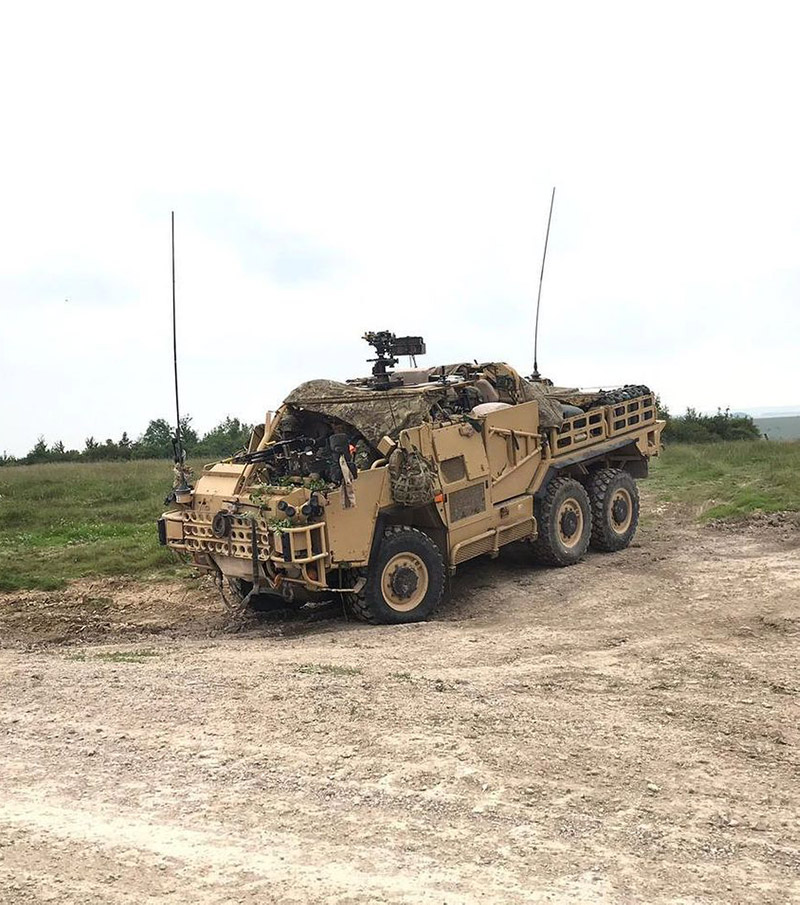 Coyote is closely related to the Jackal 2, with a six-wheel drive system. With an increase in carrying capacity it greatly enhances the range and endurance of the Troops. It is often deployed as the Troop Sergeants vehicle within a troop to allow for additional ammunition, food, water, fuel, vehicle spares and adds the ability to transport casualties around the battlefield. Also used by the Regiments Support Troops to carry JAVELIN and Sniper Rifles.

Weighing 7-tonnes, the Panther is air transportable and can be underslung beneath a Chinook helicopter. It is armed with a 7.62mm L7 general purpose machine gun, which can be upgraded to a 12.7mm/cal weapon if required, plus an appropriate day or night sighting system.Panther is used within the Squadron and Regimental HQs due to its improved communications system. 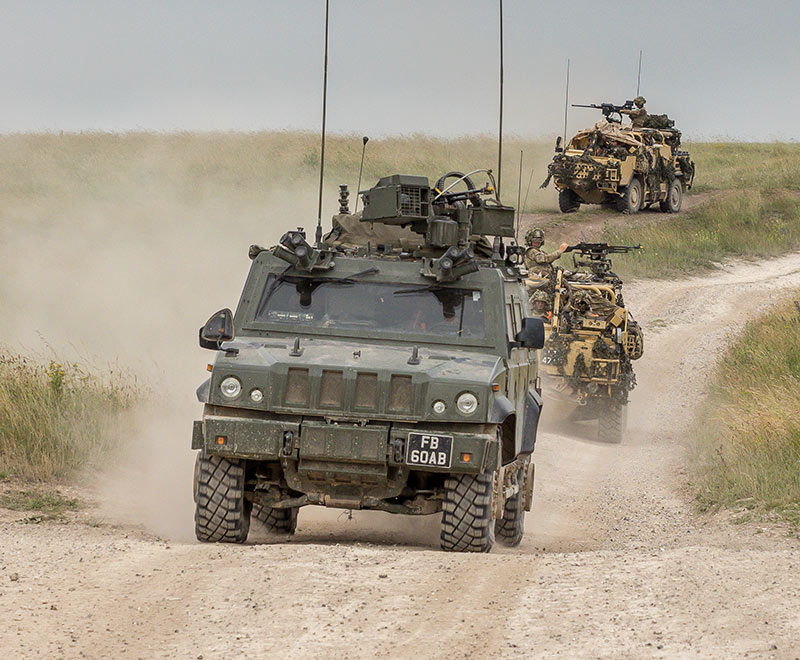 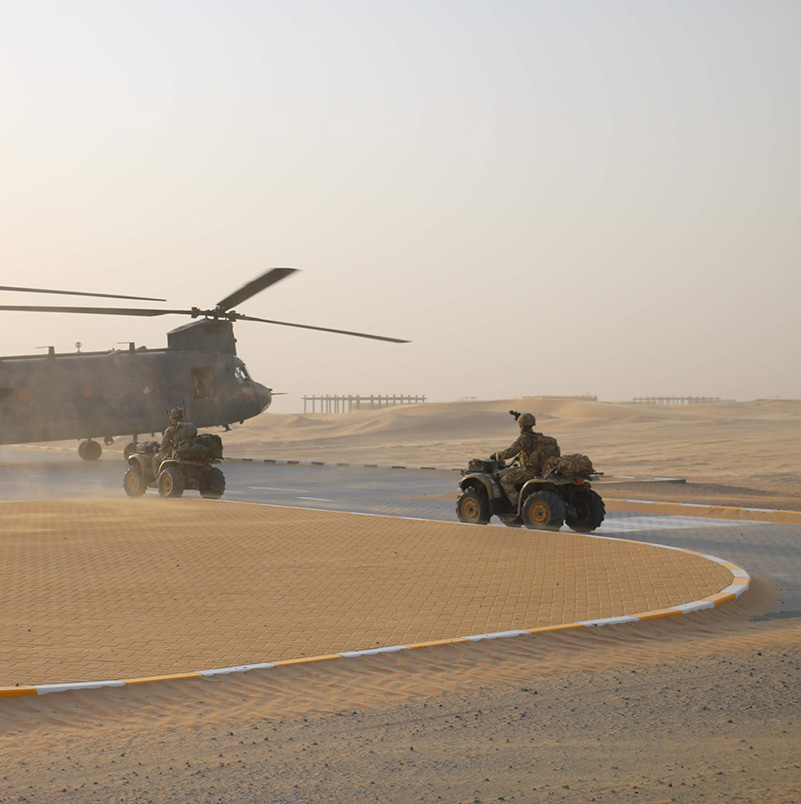 Used primarily by the Regiments Snipers these vehicles allow them to move quickly over fast terrain and can be loaded into the back of a Coyote. They have a trailer which can be used to move injured troops on a stretcher and also move ammunition around the battlespace.

The family of Support Vehicles, built by MAN Truck and Bus UK Ltd, entered service in 2008. The SV fleet is the Army's 'workhorse' delivering logistic effect for all Army units.

The SV fleet provides far greater mobility than previous generation cargo vehicles and can be fitted with armour, communications and ECM equipment, and a 7.62 mm machine gun for protection. 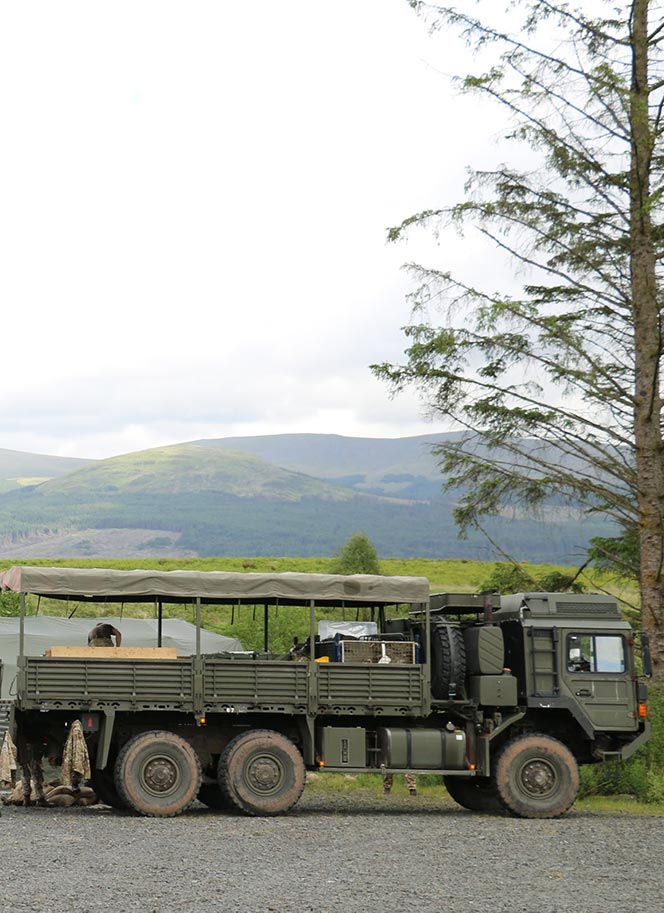 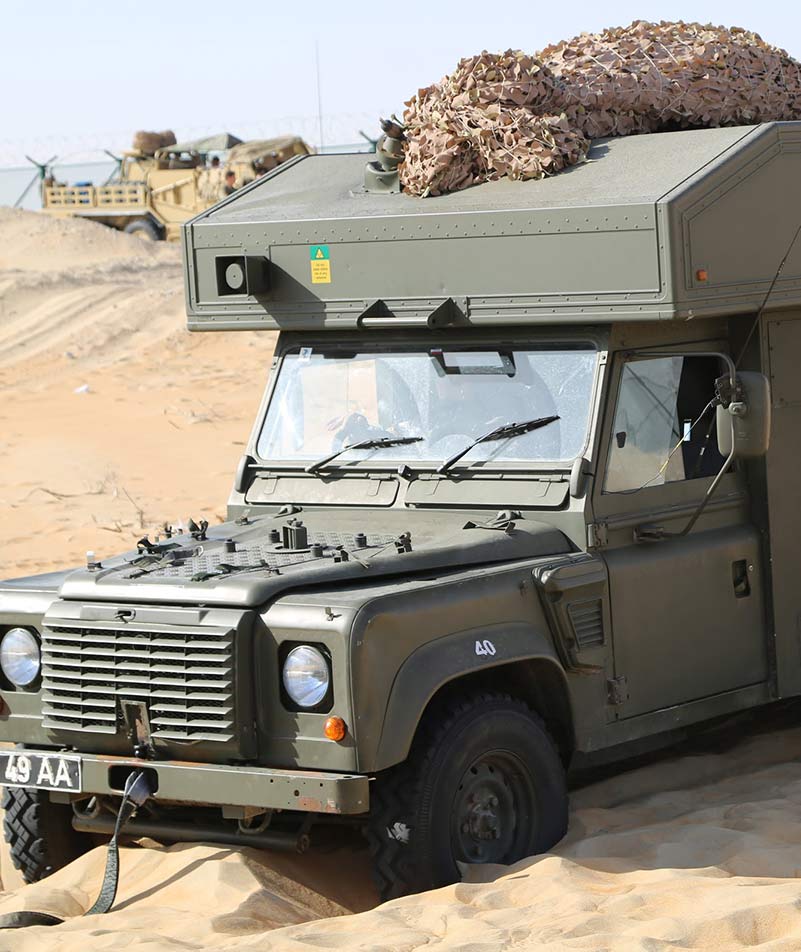 The Land Rover battlefield ambulance is based on the TUM chassis.It has a capacity for a combination of up to four stretchers or six seated casualties and provides a very high standard of medical facilities.

It is also air portable and meets amphibious requirements.

SA80 is the designation for a revolutionary family of assault weapons. On its introduction, it proved so accurate that the Army marksmanship tests had to be redesigned.

These are the British Army's standard combat weapons. Made by Heckler and Koch, they fire NATO standard 5.56 x 45mm ammunition.

This reliability is combined with accuracy, versatility and ergonomic design. It is considered a first-class weapon system and world leader in small arms.

The SA80 Underslung Grenade Launcher (UGL) system consists of a Heckler & Koch AG-36 40mm grenade launcher and EO Tech holographic sight wedded to an ISTEC range drum. The UGL allows fire teams to deliver effective fragmenting munitions out to 350 metres. Advantages of the system are low recoil, ease of use, reduced ammunition weight and ability to have a chambered grenade at the ready whilst continuing to fire the SA80. 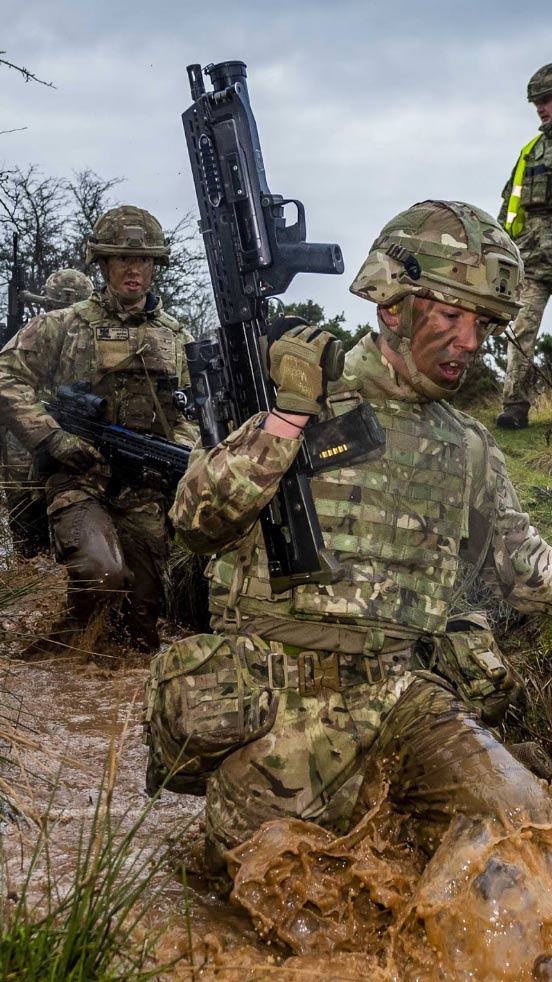 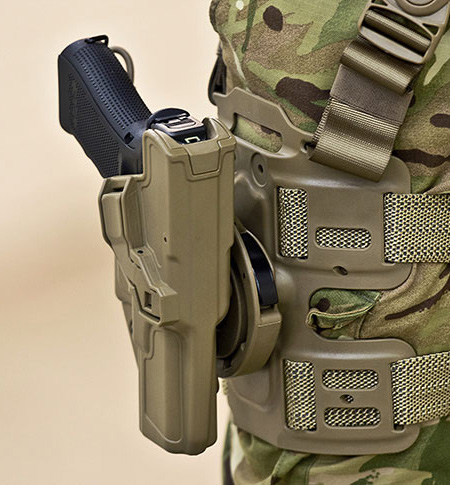 The Glock 17 Gen 4 pistol is much lighter than its predecessor, Browning pistol, and more accurate. It also has an increased magazine capacity of 17 x 9mm rounds, compared to 13 rounds for the Browning.

British snipers fulfil a vital and enduring role on the battlefield, in terms of intelligence-gathering, target identification and eliminating high-value targets.

The first batch of SSIPs were deployed to Afghanistan in May 2008.Designed to achieve a first-round hit at 600 metres and harassing fire out to 1,100 metres, Accuracy International's L96 sniper rifle has also been upgraded with a new x3-x12 x 50 sight and spotting scope. 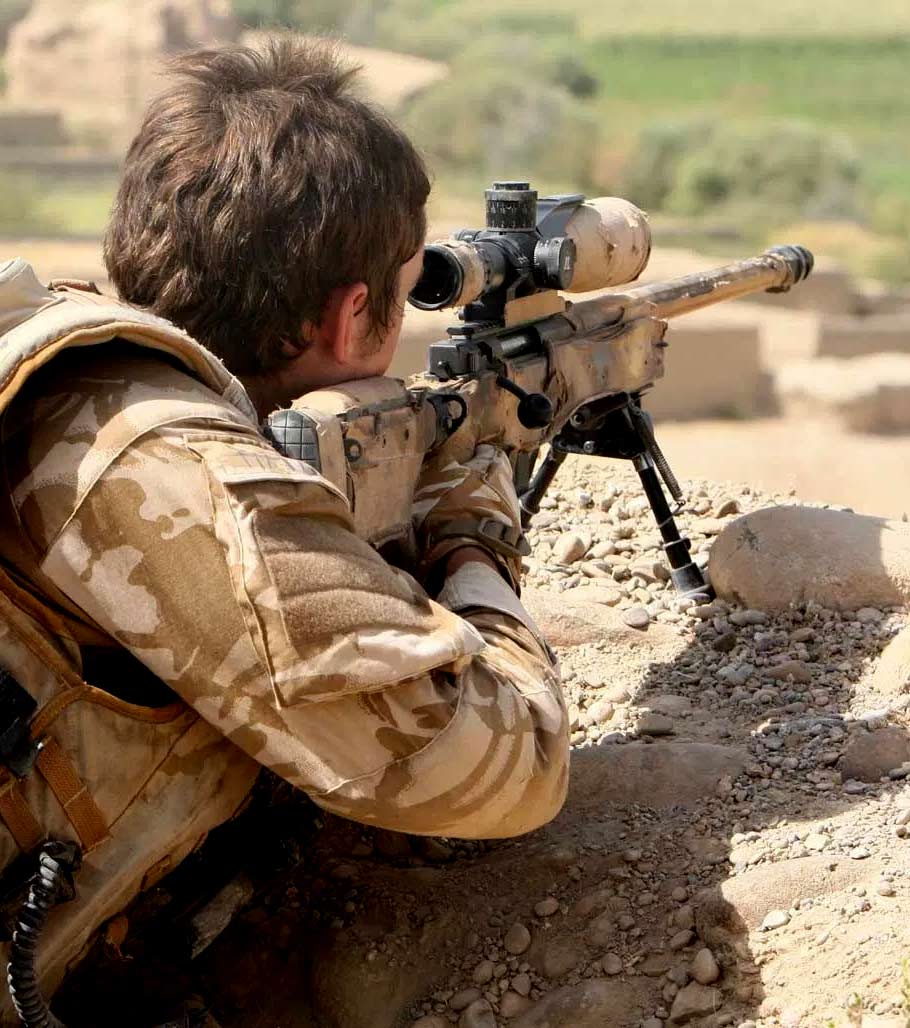 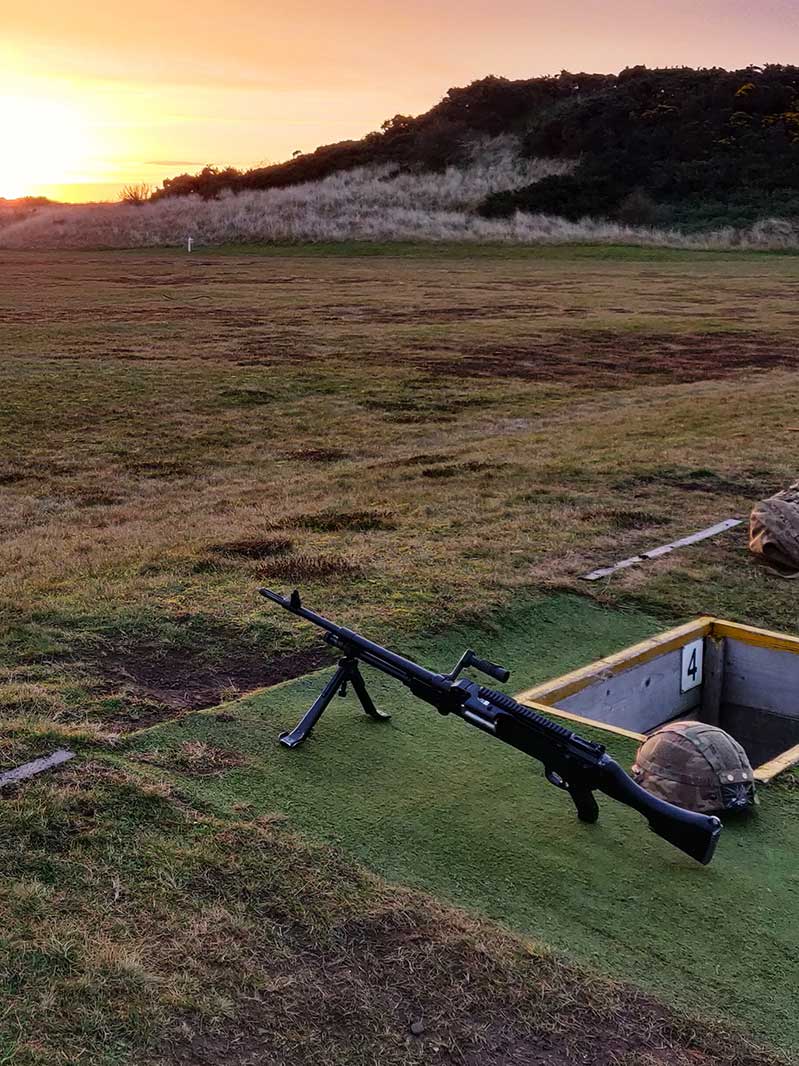 The L7A2 General Purpose Machine Gun (GPMG) is a 7.62 x 51mm belt-fed general purpose machine gun which can be used as a light weapon and in a sustained fire (SF) role.

In the SF role, mounted on a tripod and fitted with the C2 optical sight, it is fired by a two-man team who are grouped in a specialist Machine Gun Platoon to provide battalion-level fire support. In SF mode, the GPMG, with a two-man crew, lays down 750 rounds-per-minute at ranges up to 1800 metres.

The GPMG can be carried by foot soldiers and employed as a light machine gun (LMG), although it has largely been replaced by the lighter 5.56 x 45mm Minimi in this role, in most regiments. A fold-out bipod is used to support the GPMG in the LMG role.

Conventional rifle ammunition provides no fragmentation effect and is largely not effective enough against advancing armoured infantry fighting vehicles and battle tanks. On the other hand, mortars have the disadvantage of a relatively low rate of fire.

The GMG combines the advantages of both of these two types of weapons delivering high flexibility and firepower combined with the fragmentation effect of mortar ammunition. 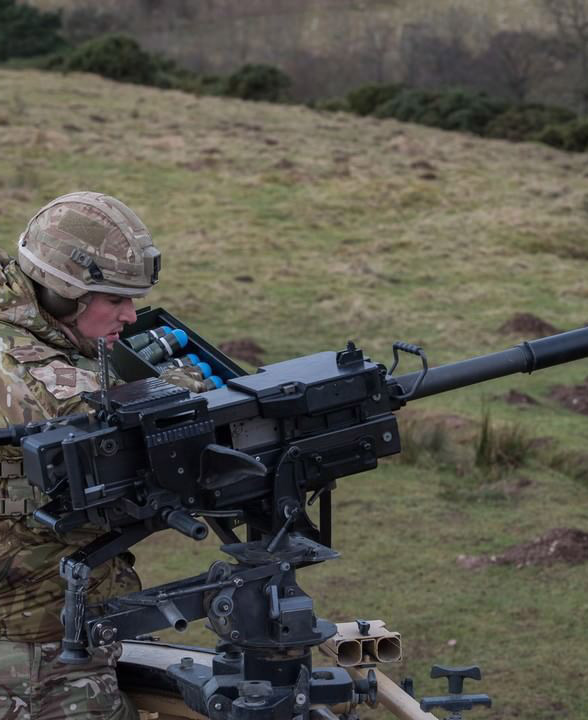 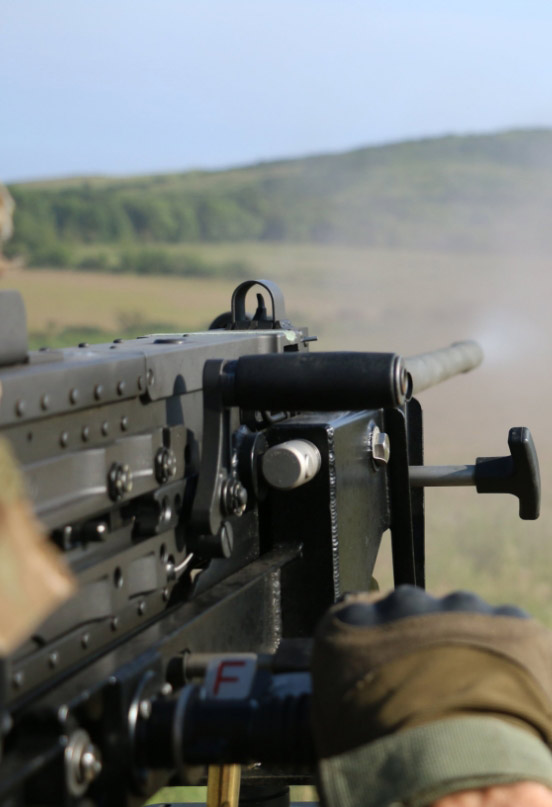 The powerful L1A1 12.7mm (.50) Heavy Machine Gun (HMG) is an updated version of the Browning M2 Fifty-cal - recognised as one of the finest heavy machine guns ever developed.

The HMG provides integral close-range support from a ground-mount tripod or fitted to a Jackal using the Weapon Mount Installation Kit (WMIK) and a variety of sighting systems. The performance of the HMG has recently been enhanced with a new 'soft mount', to limit recoil and improve accuracy, and a quick-change barrel.

The HMG provides the commander with added capability at greater ranges (1500-2000m) when support from armoured vehicles is not available.

The Next-generation Light Anti-tank Weapon (NLAW) is the first, non-expert, short-range, anti-tank missile that rapidly knocks out any main battle tank in just one shot by striking it from above.

NLAW utilises predicted line of sight guidance and has overfly top and direct attack modes, and it is easy to use, making it a valuable tank destroyer for light forces that operate dismounted in all environments, including built up areas.

It also has night vision capability and is designed for all climate conditions and environments. 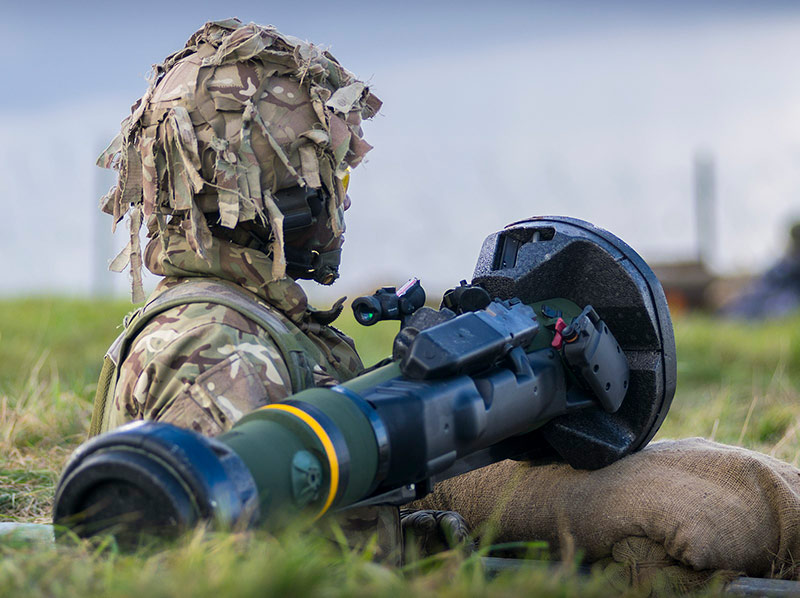 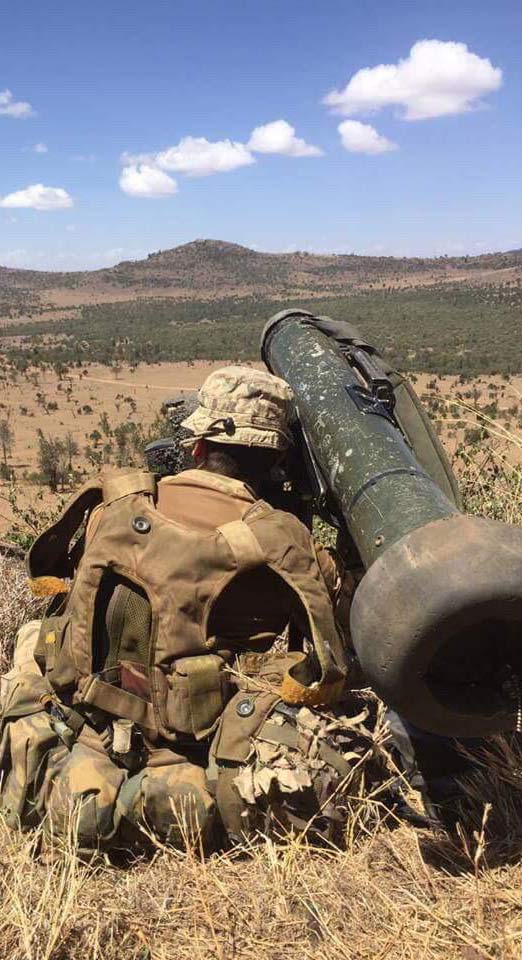 Javelin, the medium range anti-tank guided weapon replacement for Milan, is an enhanced version of the American weapon proven on operations in Iraq and Afghanistan by US forces.

Although designed primarily to destroy tanks and light armoured vehicles, Javelin will also provide a potent, all-weather, day or night capability against fixed defences, such as bunkers and buildings.

The integrated sight allows the operator to acquire the target, lock-on, fire and 'forget'. This means that as soon as the missile is launched, the firer can acquire another target or move position. Javelin has a maximum range of 2500m, and overfly and direct attack modes of operation.

The sharpshooter rifle has improved the long-range firepower available on the front line. The rifle fires a 7.62mm round and has enhanced accuracy of engagement during longer-range firefights. This weapon is used by some of the best shots in the infantry.

The sharpshooter complements the already potent range of weapons used by our Regiment. 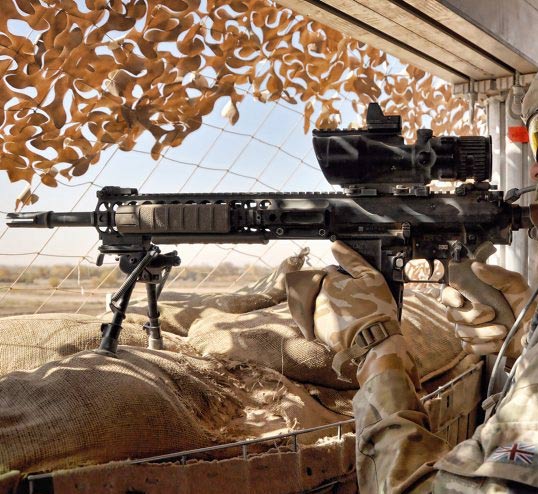